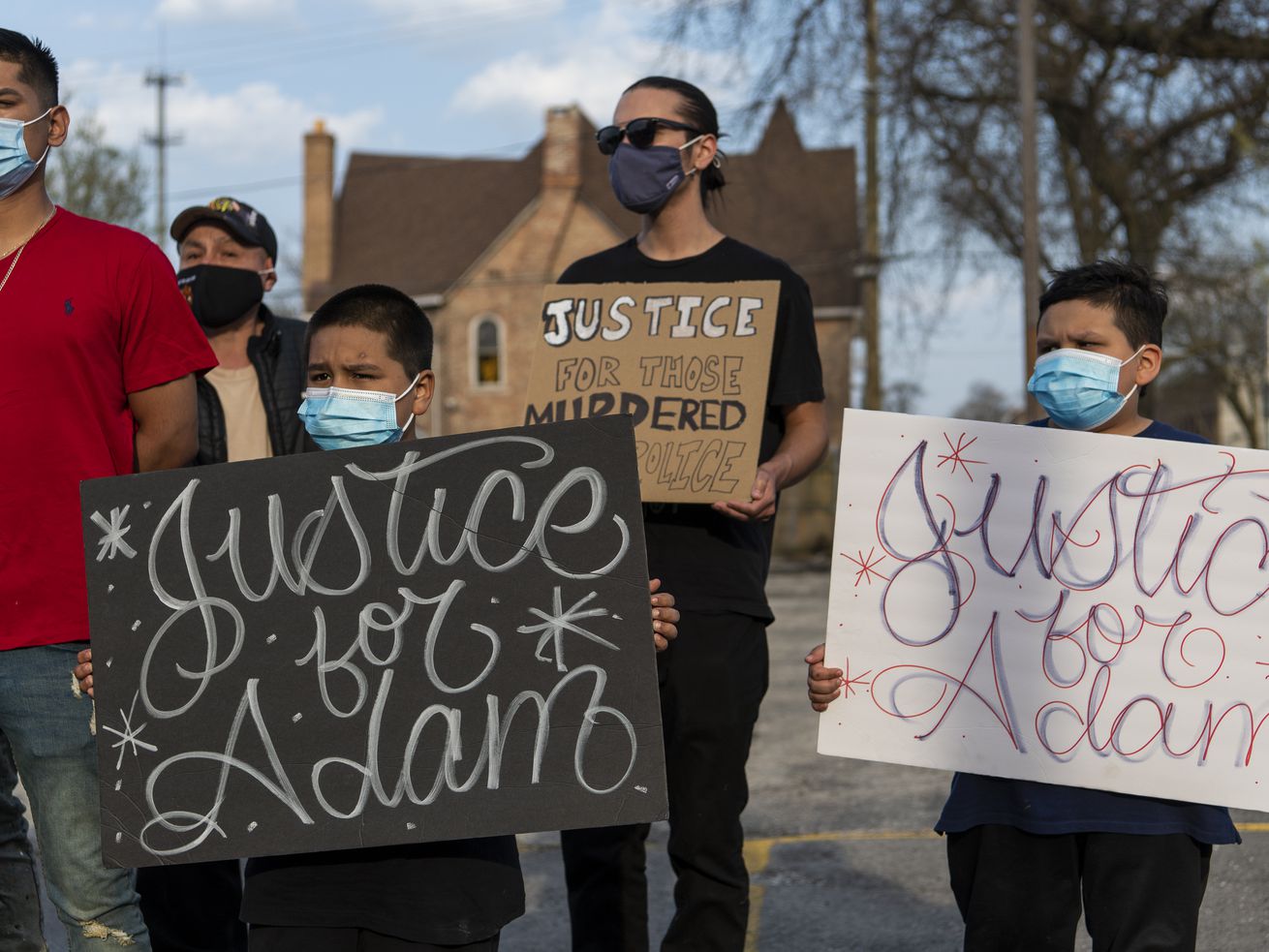 Baltazar Enriquez and Little Village community members call for the release of videos related to the fatal police shooting of Adam Toledo at a rally Tuesday, April 6, 2021. | Tyler LaRiviere/Sun-Times

More than a week after Adam Toledo was fatally shot by Chicago police, community members continue to push for the release of video showing what happened in the moments before the shooting.

More than a week after a 13-year-old boy was fatally shot by Chicago police, community members are calling for a peace talk with Mayor Lori Lightfoot and the Ogden District commander.

“We have called on him to talk peacefully,” said Baltazar Enriquez, the president of the Little Village Community Council, about Chicago Police Department Cmdr. Gilberto Calderon. “To bring him to the table for him to mourn with us, for him to cry with us and for him to suffer what we are suffering.”

Holding signs stating, “Justice for Adam,” the group also called for the release of any videos that will show the moments leading to when Adam Toledo was gunned down by police early March 29 in the 2400 block of South Sawyer Avenue. Officials did not disclose that the person who was shot was a minor until days after the shooting. Since then, community groups have held protests and vigils for Toledo.

Tyler LaRiviere/Sun-Times
Baltazar Enriquez and Little Village community members call for the release of videos related to the fatal police shooting of Adam Toledo at a rally Tuesday, April 6, 2021.

He described Toledo as “our George Floyd,” pointing out policies are already changing because of the shooting. Lightfoot previously said she has directed Chicago police to draft a new foot pursuit policy.

Kristian Armendariz, 23, of Little Village, was among those who called for officials to come to the neighborhood to speak with community members to improve relations between police and residents. He also said the group wants to see a community-led review board that would look into police discipline.

“I shouldn’t have to fear for my life seeing a squad car pass by me, but instead I’m terrified for my life,” he said, pointing out he could be stereotyped because he’s Latino and lives in Little Village.

The group decried reports about alleged retaliation against police officers in the area. Enriquez said residents in Little Village are hardworking and “not cop killers.”

After chanting Toledo’s name, the group shared food in the parking lot of Farragut Career Academy while others stopped in front of a makeshift memorial surrounded by religious candles.

Tyler LaRiviere/Sun-Times
A memorial sits at the mouth of the alleyway where Adam Toledo was shot and killed by Chicago police near 24th Street and Sawyer Avenue in the Little Village neighborhood.

Elvia Malagón’s reporting on social justice and income inequality is made possible by a grant from The Chicago Community Trust.

How to celebrate Ramadan 2021 in lockdown