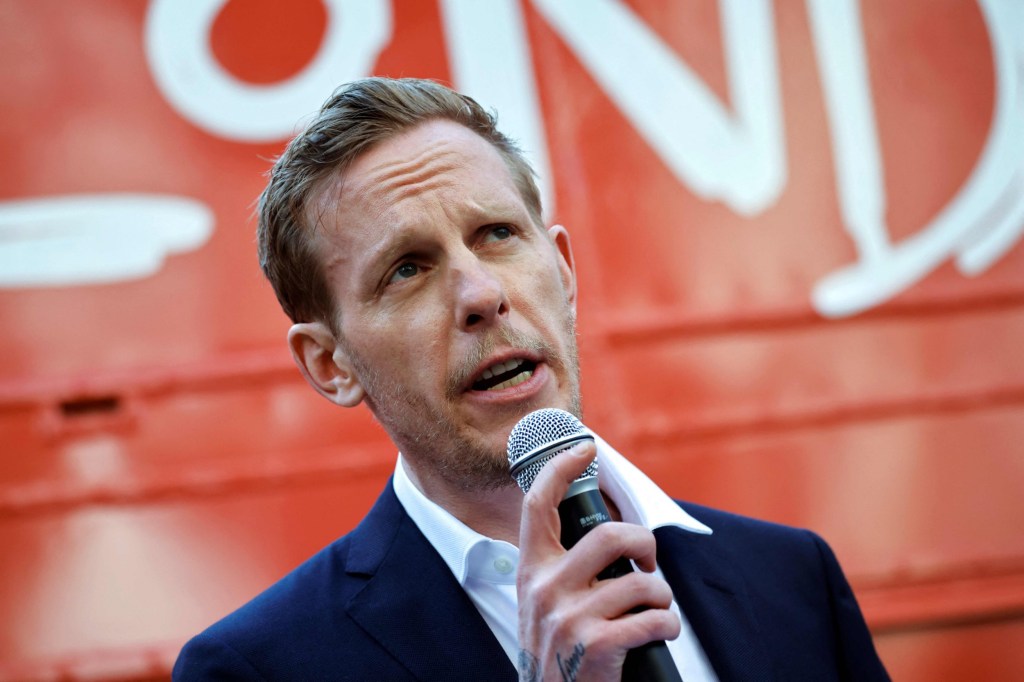 Laurence Fox has been sued for defamation (Picture: TOLGA AKMEN/AFP via Getty Images)

The actor turned aspiring Mayor of London last year called CEO of Mental Health First Aid England and deputy chair of Stonewell Mr Blake and drag queen Crystal ‘paedophiles’ in now-deleted tweets, in a row over his boycott of Sainsbury’s due to the supermarket’s support of Black History Month.

In a separate now-deleted tweet, he also called Ms Thorp a ‘paedophile’.

Mr Blake and Crystal last year announced their intention to sue Fox, and  their lawsuit for defamation was filed on April 1 in the High Court.

Mr Blake, Ms Thorp and Crystal, under their birth name Colin Seymour, are listed as the claimants, represented by Patron Law.

In October 2020, Fox hit out at Sainsbury’s for creating a safe space for its Black staff, after the supermarket chain said in a statement: ‘We are proud to celebrate Black History Month together with our Black colleagues, customers and communities and we will not tolerate racism.

‘We proudly represent and serve our diverse society and anyone who does not want to shop with an inclusive retailer is welcome to shop elsewhere.’

Crystal is listed as a claimant (Picture: BBC/ Leigh Keily / Matt Burlem)
Nicola Thorp is among those represented by Patron Law in the suit (Picture: Mike Marsland/WireImage)

The Lewis star tweeted: ‘Dear @sainsburys I won’t be shopping in your supermarket ever again whilst you promote racial segregation and discrimination.’

Mr Blake tweeted: ‘What a mess. What a racist t**t’, with Fox replying: ‘Pretty rich coming from a paedophile.’

Fox also called Crystal a ‘paedophile’ after the drag queen tweeted: ‘Imagine being this proud of being a racist! So cringe. Total snowflake behaviour.’

Mr Blake said that he ‘regretted the unnecessary language’ he used in his tweet again Fox but said: ‘In response, Mr Fox seriously defamed me and I have instructed Mark Lewis from Patron Law to sue for defamation.’

Canadian performer Crystal, who appeared on season one of Drag Race UK and lives in London, tweeted: ‘I will not stand for racism when I see it, and I will not stand for homophobic defamation when it is directed at me. An accusation of paedophilia is one of the oldest homophobic tropes, and it was very shocking to have that levelled at me, not just by Mr Fox, but also his many followers who believed him.

I detest racism. Challenging it is important to me, but I will choose my words more carefully in future. I want to be the best ally I can to people impacted by racism. pic.twitter.com/QhQgkCZBLB

‘I may have had to endure homophobic bullying as a child, but I will not tolerate it as an adult. Thank you so much to everyone who has voiced their …read more

Boy, 10, died after hitting head playing football ‘with shoes that were too big’