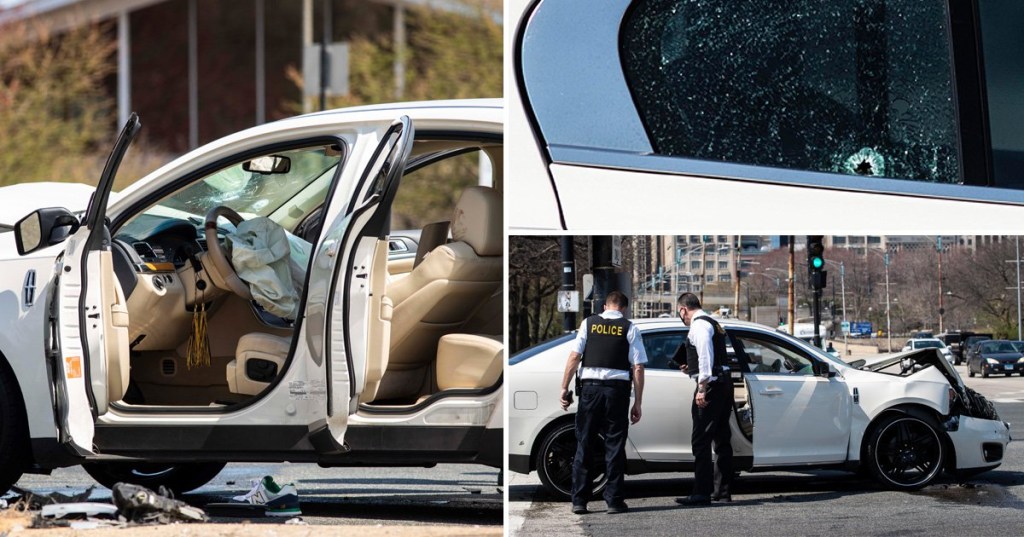 The boy is in a critical condition after the shooting (Picture: AP)

A one-year-old boy was shot in the head in Chicago on Tuesday, after an apparent road rage incident.

It comes as seven people were shot in a fight a few miles away in what could become one of the most violent years for the city in memory, according to police.

The 21-month-old child, previously identified as three and then two years old, is in a critical condition after veing gunned down on Tuesday morning while riding in a car on the city’s famous Lake Shore Drive.

Chicago Police believe the incident arose because of a dispute with a driver of another car and that one vehicle would not let the other enter a lane of traffic while both were heading north.

Pictures show a badly damaged white car with a caved in front and bullet holes in the window.

Commander Jake Alderden told a news conference outside the hospital where the boy was taken that the two drivers apparently did not know each other, but one of the drivers opened fire near the Shedd Aquarium.

The force added that the car crashed after the boy was shot in the temple near Grant Park on the city’s South Side at about 11 am.

A woman jumped out of the car with the child and they were driven to Northwestern Memorial Hospital before the boy was transferred to Lurie Children’s Hospital, where police said he was in critical condition.

Police recovered bullet casings over about a two-block stretch of the roadway. Alderden said a handgun was found with one of the occupants of the car the boy was in but that it remained unclear whether the gun had been fired.

Police say they are questioning a person of interest in the shooting but no arrests have been made.

It comes after a fight on Monday night turned to gun violence in the South Side neighborhood of Englewood, leaving seven people injured.

A 39-year-old woman was in a serious condition after she was shot in the arm and abdomen.

The incident took place near Grant Park on Chicago’s famous Lake Shore Drive (Picture: AP)
What appears to be a bullet hole in the car (Picture: AP)

Five men were hospitalized in fair condition, while another person was in good condition after walking into a hospital in the Cook County suburb of Harvey with a gunshot wound to the leg, according to police.

No arrests have been made.

The shootings follow violence across Chicago on Easter Sunday that left seven people dead and at least 10 more with gunshot wounds.

Last week, a Chicago police officer fatally shot 13-year-old Adam Toledo as he ran from officers, who say he was carrying a handgun.