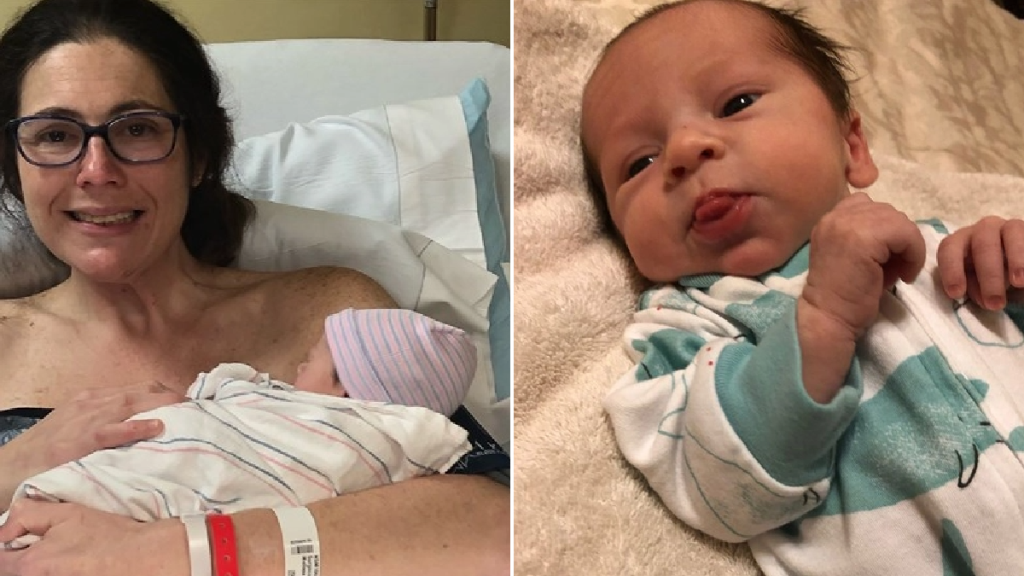 Melissa Surgecoff didn’t realize she was pregnant until she sat on the toilet and a baby popped out. The newborn boy, since named Liam, is doing well (Pictures: NBC)

A woman had no idea she was pregnant until she gave birth while sat on the toilet and her newborn baby boy fell into the bowl. Melissa Surgecoff, from Boston, mistook her labor pains for kidney stones, and says the only relief she got from intense cramps was when she sat on the toilet.

Melissa, 38, gave birth on March 8 after feeling something ‘rush’ out of her. She told Today: ‘I look in the toilet and I still didn’t know what it was. And I thought I basically lost an organ because I didn’t know.’

Melissa’s fiance Donnie Campbell, 37, then came in to check on her – and realized she’d given birth to a baby boy, who was now in the toilet. She said: ‘I’m screaming I’m freaking out, I’m in shock. I don’t know what’s going on, and Donnie went to the toilet, and he rescued the baby.’

Donnie said he initially mistook the baby for a ‘giant dookie’ (poop) but then quickly realized it wasn’t, ‘because it was way too big.’ The new dad managed to clean off his son using the same technique he had seen on television shows, with the baby – since named Liam – starting to breathe seconds later.

Melissa’s fiance Donnie Campbell realized his partner had given birth, and quickly rescued Liam from the toilet bowl, before cleaning him up (Picture: NBC)

Donnie said: ‘I kept watching his stomach and he kept breathing on his own and then it became more of a celebration. I stood up and held him close to my heart against my body to keep him warm.’

The couple had called an ambulance between Melissa’s pain getting worse, and her giving birth, with paramedics who arrived expecting to find a kidney stone stunned to find the couple with a newborn baby.

Melissa and Liam were taken to hospital, where he was found to be healthy, aside from a minor iron deficiency. The new mom had long suffered from irregular periods, and put her weight gain down to being stuck at home during Covid.

She added: ‘So if you look back on it now, yeah, there are clear-cut signs.

Despite his sudden arrival, Liam was perfectly healthy, and is now back home with his parents. They plan to marry in September (Picture: NBC)

‘Like my feet were swollen … my shoulders and upper body were swollen and just like, you know, gaining weight.’

Melissa says she and Liam went into ‘super overdrive’ with planning for Liam after his sudden arrival.

They have been together since 2014, and originally planned to marry in September 2020, but were forced to postpone because of Covid.

Melissa and Donnie now plan to tie the knot on June 18, with baby Liam set to attend their nuptials.

Get in touch with …read more

How will Kush Kazemi leave EastEnders? Jail, escape or does he die?

What is phishing and how to spot email scams?

Can you choose which Covid vaccine you get as Moderna is rolled out in the UK?