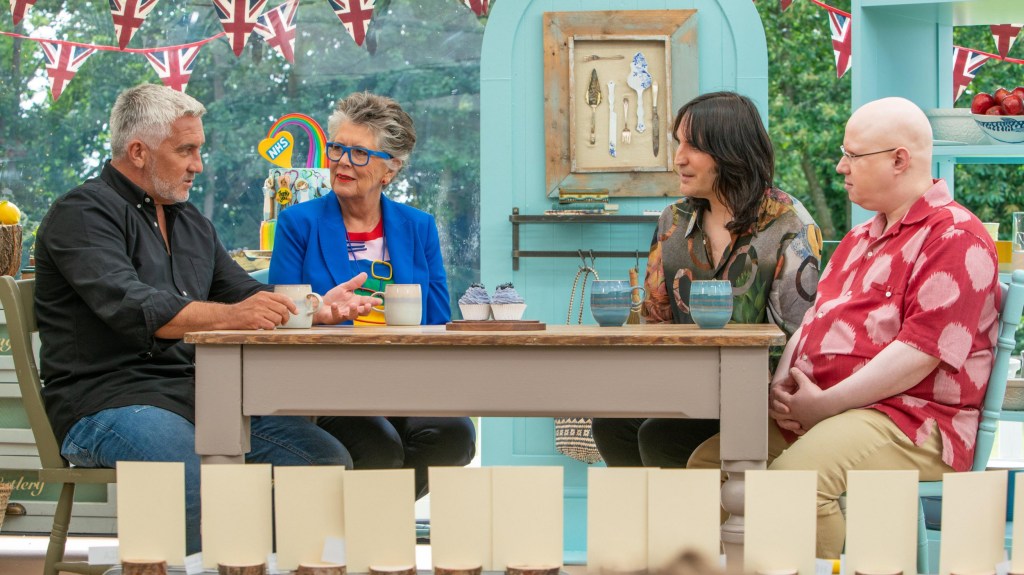 Paul Hollywood, Prue Leith, Noel Fielding, and Matt Lucas are expected to be back for the next series (Picture: Mark Bourdillon/ Love Productions)

The Great Celebrity Bake Off for Stand Up To Cancer is coming to an end, meaning we’ll soon be without our weekly cake fix.

A moment of silence, please.

Celebs including James McAvoy, KSI, Jade Thirlwall and Daisy Ridley have impressed and also mildly terrified us with their baking skills (or lack therof).

We’ve had baking triumphs and also potentially the most iconic moment in celeb Bake Off history as KSI was left questioning all of his life decisions when he flipped his cherry pie upside down.

Now we’ve reached the end of our celeb bakers’ time in the tent, hopefully it won’t be too long until we get a new cohort of fresh-faced hopefuls.

When does the 2021 series of Bake Off start?

There are no exact dates for the 2021 series of Bake Off yet, but it usually airs from September to November.

There’s nothing to suggest that will change for this year.

Filming dates are likely to be between April and August this year, although that could change slightly as the bakers are required to form a social bubble to comply with coronavirus restrictions.

Matt Lucas and Noel Fielding are expected to be back to present the main series.

The Mighty Boosh star was notably absent from the celebrity series, leaving Matt to take the reigns on his own.

However, fans shouldn’t worry – he was on paternity leave, as he and his wife Lliana Bird had welcomed their second child at the time of filming.

Will Paul Hollywood and Prue Leith be back?

Paul and Prue will be on hand to scrutinise bakes (Picture: Channel 4)

It’s expected that Paul Hollywood and Prue Leith will be back to scrutinise the bakers’ attempts – and we wouldn’t have it any other way.

The next series will be Paul’s 12th, and Prue’s fifth.

While Prue is now a seasoned pro, she did cause a bit of chaos in her earlier series, when she accidentally leaked the winner before the final episode had aired.

In 2017, the judge accidentally revealed on Twitter that Sophie Faldo had won the series.

More: The Great British Bake Off

Prue was holidaying in Bhutan at the time of her mishap and forgot about the time difference.

However, in the years since, she’s found it hilarious and, most importantly, pledged to stay away from her phone every final.

Great British Bake Off is due to return to Channel 4 this year.

Got a story?
If you’ve got a celebrity story, video or pictures get in touch with the Metro.co.uk entertainment …read more

Are fast fashion brands trying to greenwash us?

Covid vaccines have stopped deaths of more than 10,000 older people

Trevor Williams spins a gem vs. the Brewers in Cubs debut