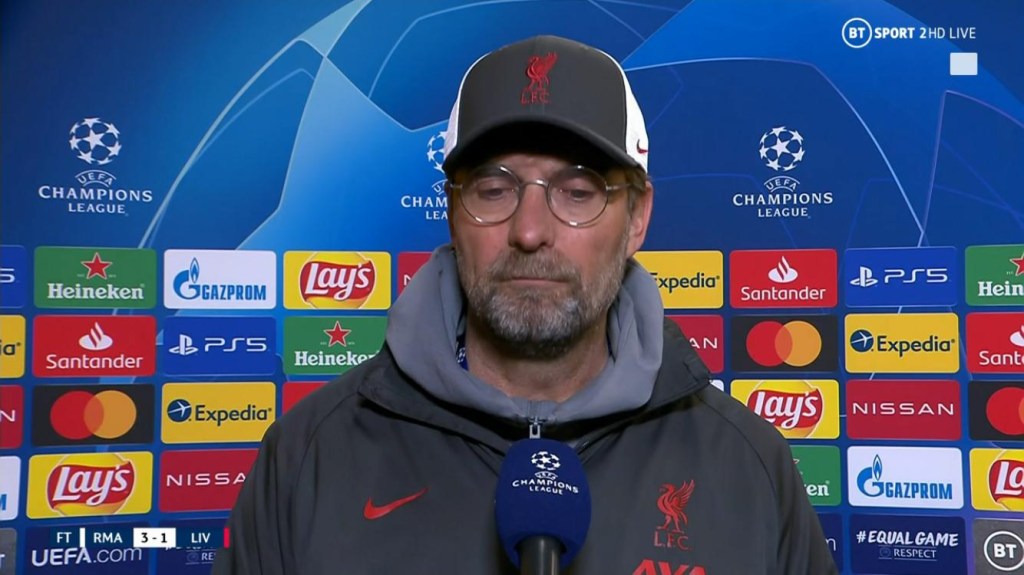 Jurgen Klopp was unhappy with the referee after Liverpool’s defeat to Real Madrid (Picture: BT Sport)

Jurgen Klopp has revealed he told the referee he was ‘unfair’ with Sadio Mane during Liverpool’s Champions League defeat to Real Madrid and appeared to have a ‘personal’ issue with the forward.

‘The situation with Sadio, I’m not sure what the ref did tonight,’ Klopp said in his post-match interview.

‘It seemed like it was sort of personal. I told him after the game, “I just thought he was unfair with Sadio.” He didn’t lose us the game but you need just an OK ref.’

On Liverpool’s performance, Klopp added: ‘If you want to go to the semi-final, you have to earn the right to do so. We didn’t do that tonight, especially in the first half.

‘The only good thing I can say, apart from the goal, is it’s only the first half of the tie. We just didn’t play good enough football to cause Real Madrid more problems.

‘We made it too easy for them. These mistakes can happen. We didn’t deserve a lot more but that one goal and the second half was OK. It gives us a lifeline.’

Perfecting self-driving cars — can it be done?