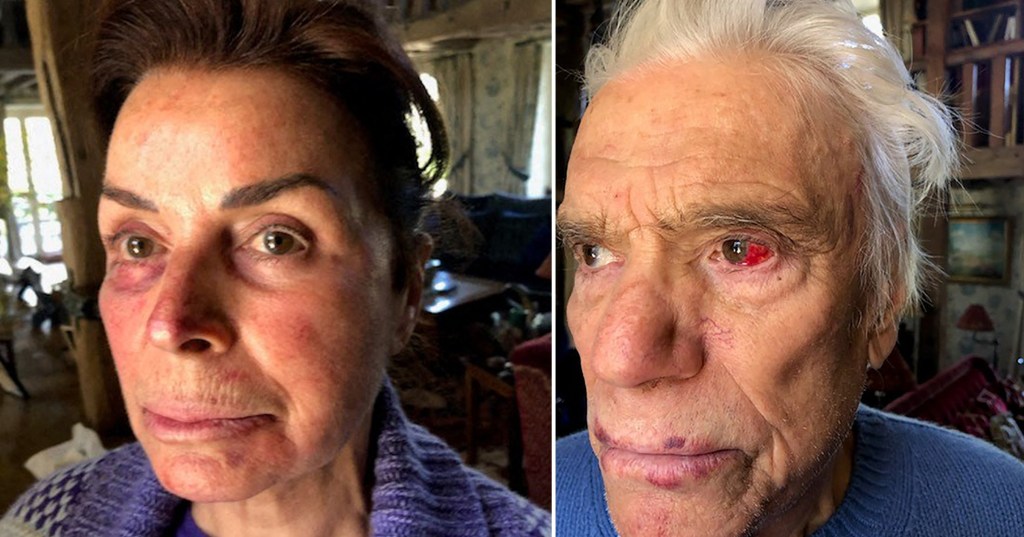 Bernard Tapie and wife Dominique were tied up with electrical cords (Picture: AFP)

The 78-year-old tycoon, a former top politician, was repeatedly clubbed over the head when a gang of four men broke in on Saturday night.

Mr Tapie and wife Dominique, 70, were tied up with electrical cords.

She was dragged by the hair as the gang demanded to know where their valuables were but eventually untied herself and raised the alarm.

Local mayor Guy Geoffroy said: ‘There was no treasure, and the fact that they didn’t find any made the violence even worse.’

Grandson Rodolphe Tapie said the entrepreneur had refused to be taken to hospital, adding: ‘He is shattered, very tired.

‘He was sitting on a chair when he was hit with a club. My grandmother was taken to hospital for a check-up. She’s doing well.’

Prosecutors, who have appealed for witnesses, said the burglars got away with two watches, including a Rolex, and jewellery.

They are said to have got in through a first floor window, even though there are guards at the Tapies’ Moulin de Breuil estate at Combs-La-Ville, near Paris. Mr Tapie built a sports and media empire while serving in socialist governments in the 1990s.

He was known for taking over failing companies in corporate raids, stripping them of their assets and selling them for vast profit.

Among the status symbols he spent millions on was Olympic Marseille FC.

The club won five consecutive league titles and became European champions, but was accused of match-fixing and eventually penalised by being forcibly relegated.

After five months in jail for misuse of corporate assets and tax fraud, in 1997 he began a showbiz career that saw him become a household name as an actor, singer and TV host.

The burglary came as Mr Tapie awaits another fraud trial.

It was adjourned last year because he was suffering from cancer and is due to resume in May.

For more stories like this, check out our news page.

How to get your Metro newspaper fix

Metro newspaper is still available for you to pick up every weekday morning or you can download our app for all your favourite news, features, puzzles… and the exclusive evening edition!

The Queen and Prince Philip: The story of the dashing naval officer and a shy Princess