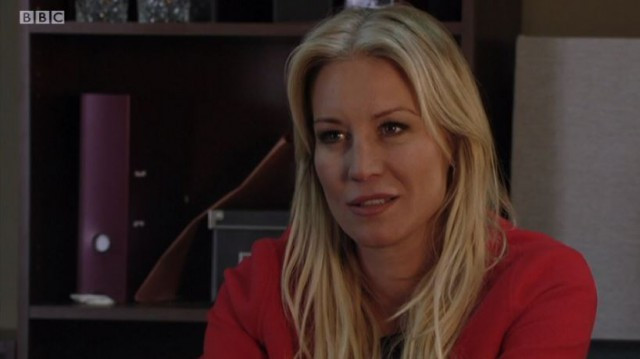 Denise played the role of Karin Smart in 2015 (Picture: BBC)

TV presenter and actress Denise Van Outen has revealed working on EastEnders wasn’t actually as fun as she thought it would be, saying there was a lot of tension while she was on set.

Denise has opened up about her time on the show, admitting her colleagues were constantly moaning and whinging.

Speaking to The Sun, Denise said: ‘Everyone I met on EastEnders would just moan about it, just whinging about everything. The day I arrived, and I’m quite a bubbly person, I was like “hi!” and they were like “oh, you’re going to hate this” and I said “Oh really?”

I don’t know what it’s like now but when I was on, I found it very intense. But I think it was quite public knowledge there was a lot of tension on set.’

Denise has put the tensions down to the hard work the actors do during their gruelling hours.

She continued: ‘I don’t want to disrespect any of the actors from EastEnders because they do an amazing job, but I think perhaps, there’s a lot they have to get through.

They’re very focused and I just thought I would have more fun.’