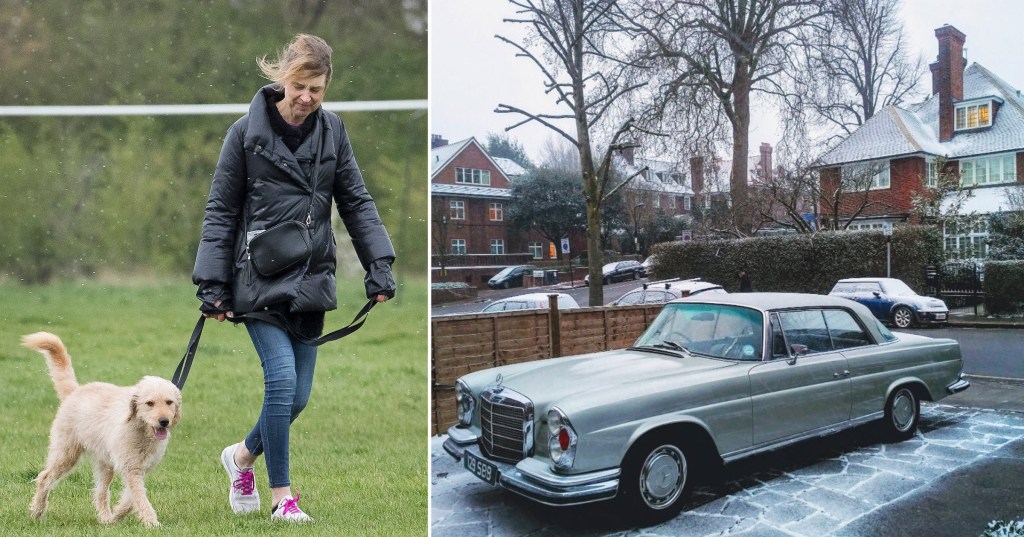 The weather in the capital is in stark contrast to the warm temperatures and sun of yesterday (Picture: @stephenbudd / LNP)

Smatterings of snow have started falling across London as freezing temperatures sweep across the country.

Londoners have seen a bitterly cold start to Easter Monday, in sharp contrast to less than 24 hours ago when many stepped out in bright sunshine and even without coats.

The weekend was warm and sunny with temperatures peaking at more than 17 degrees Celsius yesterday, but dropping to 6°C today.

Met Office forecaster Simon Partridge said yesterday: ‘There’ll be a drop of 11 degrees between one day and the next, so you will definitely notice it!’

The colder weather stems from a change of wind direction, Mr Partridge explained.

‘The air we had on Sunday came in from the south so it’s pretty mild having come off the continent,’ he added.

‘Overnight we’ll see a cold front moving southward across the country, it’s already across northern Scotland, and it’ll push its way southward overnight. That will introduce much, much colder air across the whole country.’

There have only been small amounts of snowfall this morning, with none of it expected to lay in the capital – though other areas across the UK including Aberdeen, County Durham and Tyne and Wear have seen a more substantial amount which has settled.

A dog walker in a flurry of snowfall in Wormwood Scrubs, west London (Picture: LNP)

Meteorologist Sarah Kent said of the sudden change in weather yesterday: ‘Today is a lovely day for an Easter egg hunt in the back garden, whereas tomorrow if you were doing one you’d probably want to wear three jumpers.’

Three yellow weather warnings for wind and snow are in place across northern Scotland, including Aberdeen, Inverness and the Shetland Islands, until tomorrow.

Wind speeds could reach up to 70mph with travel disruption due to frequent heavy snow.

Although the wind is not expected to be as strong in the south of the country, gusts of up to 30mph could still make the temperatures feel close to freezing.

Average temperatures for this time of year are usually around 10 to 12°C, but some areas in the UK reached almost 24°C on Wednesday last week.

The weather was welcomed as lockdown measures were eased last Monday, allowing outdoor sports to resume and groups of up to six people – or two households – to meet in parks or private gardens.

But the weather is expected to stay cool for the rest of the week, with sun and occasional wintry showers. Clouds and rain in the north will move south on Thursday and Friday.