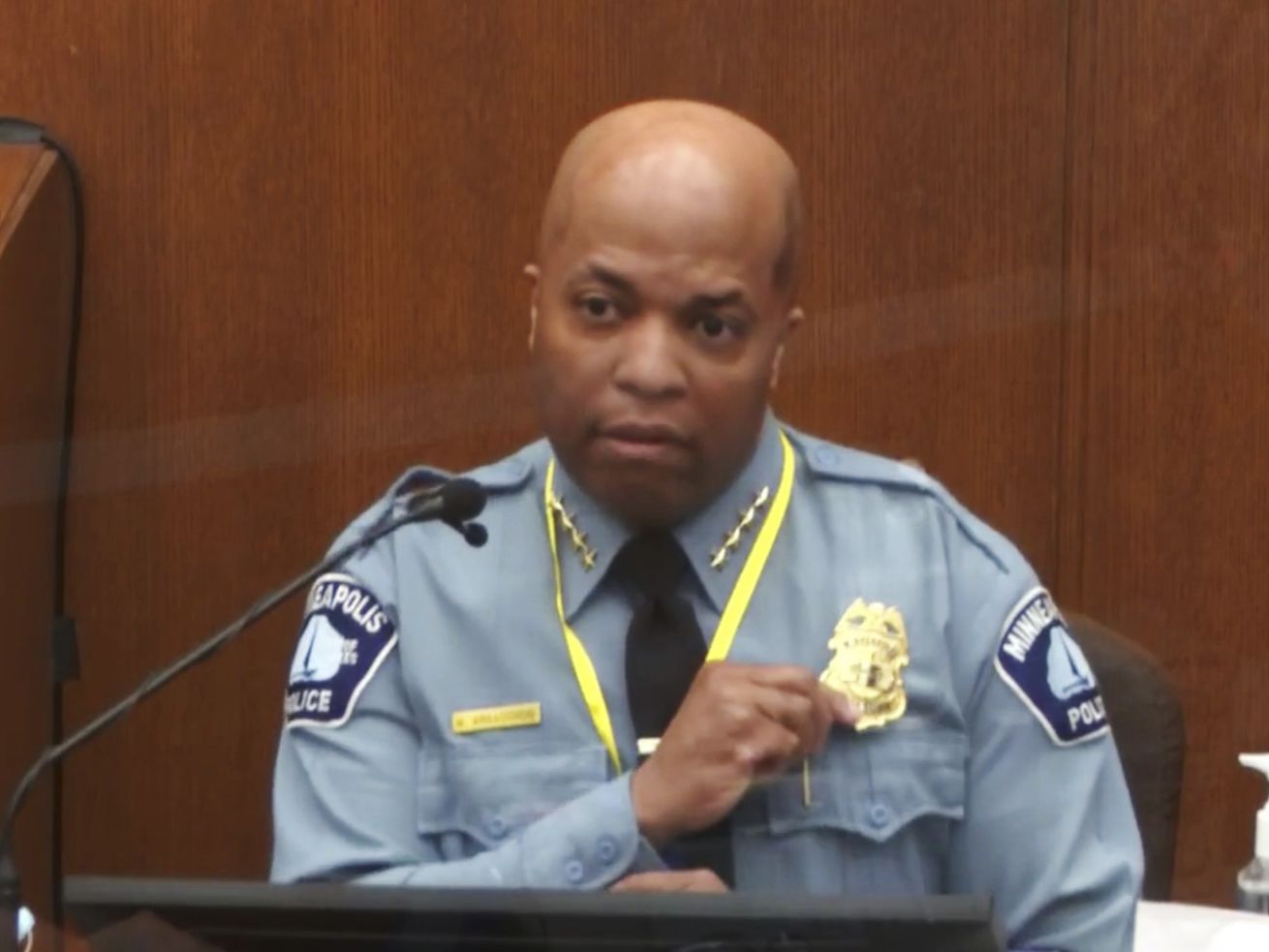 In this image from video, witness Minneapolis Police Chief Medaria Arradondo testifies as Hennepin County Judge Peter Cahill presides Monday, April 5, 2021, in the trial of former Minneapolis police Officer Derek Chauvin at the Hennepin County Courthouse in Minneapolis. Chauvin is charged in the May 25, 2020 death of George Floyd. | AP

Continuing to kneel on Floyd’s neck once he was handcuffed behind his back and lying on his stomach was “in no way, shape or form” part of department policy or training, “and it is certainly not part of our ethics or our values,” Police Chief Medaria Arradondo said.

MINNEAPOLIS — The Minneapolis police chief testified Monday that now-fired Officer Derek Chauvin violated departmental policy in pinning his knee on George Floyd’s neck and keeping him down after Floyd had stopped resisting and was in distress.

Continuing to kneel on Floyd’s neck once he was handcuffed behind his back and lying on his stomach was “in no way, shape or form” part of department policy or training, “and it is certainly not part of our ethics or our values,” Police Chief Medaria Arradondo said.

Arradondo, the city’s first Black chief, fired Chauvin and three other officers the day after Floyd’s death last May, and in June called it “murder.”

His testimony came after the emergency room doctor who pronounced Floyd dead testified that he theorized at the time that Floyd’s heart most likely stopped because of a lack of oxygen.

Dr. Bradford Langenfeld, who was a senior resident on duty that night at Hennepin County Medical Center and tried to resuscitate Floyd, took the stand at the beginning of Week Two at Chauvin’s murder trial, as prosecutors sought to establish that it was Chauvin’s knee on the Black man’s neck that killed him.

Langenfeld said Floyd’s heart had stopped by the time he arrived at the hospital. The doctor said that he was not told of any efforts at the scene by bystanders or police to resuscitate Floyd but that paramedics told him they had tried for about 30 minutes.

Under questioning by prosecutor Jerry Blackwell, Langenfeld said that based on the information he had, it was “more likely than the other possibilities” that Floyd’s cardiac arrest — the stopping of his heart — was caused by asphyxia, or insufficient oxygen.

Chauvin, 45, is charged with murder and manslaughter in Floyd’s death May 25. The white officer is accused of digging his knee into the 46-year-old man’s neck for 9 minutes, 29 seconds, outside a corner market, where Floyd had been accused of trying to pass a counterfeit $20 bill for a pack of cigarettes.

The defense argues that Chauvin did what he was trained to do and that Floyd’s use of illegal drugs and his underlying health conditions caused his death.

Chauvin attorney Eric Nelson questioned Langenfeld about whether some drugs can cause hypoxia, or insufficient oxygen. The doctor acknowledged that fentanyl and methamphetamine, both of which were found in Floyd’s body, can do so.

Girl, 10, ‘hysterical’ after stranger took photo of her then grabbed her hair