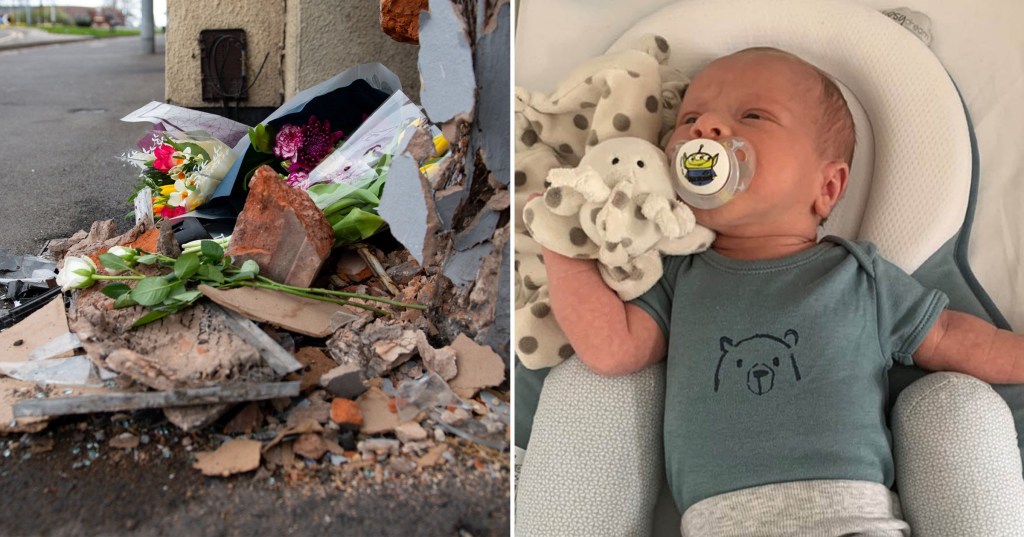 Ciaran Morris was in a pram on his first walk being pushed along the pavement by his parents when the crash happened (Picture: PA)

A man has been charged with causing death by dangerous driving after a two-week-old baby boy was hit by a car.

Ciaran Morris was in a pram on his first walk being pushed along the pavement by his parents when the crash happened in Brownhills, Walsall.

James Paul Davis, 34, has been remanded in custody, police said.

A statement from West Midlands Police said: ‘A man has been charged in connection with a crash that killed a two-week-old baby boy in Brownhills yesterday afternoon.

‘Ciaran Leigh Morris was being pushed along the pavement by family at the time and suffered serious injuries. He was rushed to hospital but nothing could be done to save him.

Speaking at the collision site today, Camaron’s aunt said: ‘[Ciaran] was four weeks premature, so he shouldn’t even have been here.’

It’s believed Ciaran Morris was being taken for his first walk when his pram was hit by a car
Upset family members console each other at the scene of the collision in High Street, Brownhills (Picture: SWNS)

A family friend was in tears as he laid flowers where part of a brick wall was reduced to rubble.

‘I know the family and all I can say is they are numb with grief,’ he told The Sun.

‘It was maybe the first time they had taken the baby out together and this happens.

‘It’s an unimaginable horror they are going through. One second and the most precious thing in their lives is gone.’

‘Davis, who is from Walsall, has been remanded in police custody to appear at Wolverhampton Magistrates Court tomorrow morning.’

The baby’s parents, Camaron Morris and Codie Holyman, both aged 18, said their ‘hearts will always ache’.

‘Mommy’s and Daddy’s hearts will always ache, we love you more than anything,’ they said.

‘We didn’t get to keep you for long but we are happy we had the chance to meet you, look after you and call you our son. Fly high angel.’

Stock Market: Suez Canal Update! Floating!
Everything you can do on April 12 after Covid restrictions ease in England

‘I don’t deserve it’: Ozzy Osbourne appears on WWE Hall of Fame ceremony to accept induction

Baby, 1, shot in head after road rage incident in Chicago