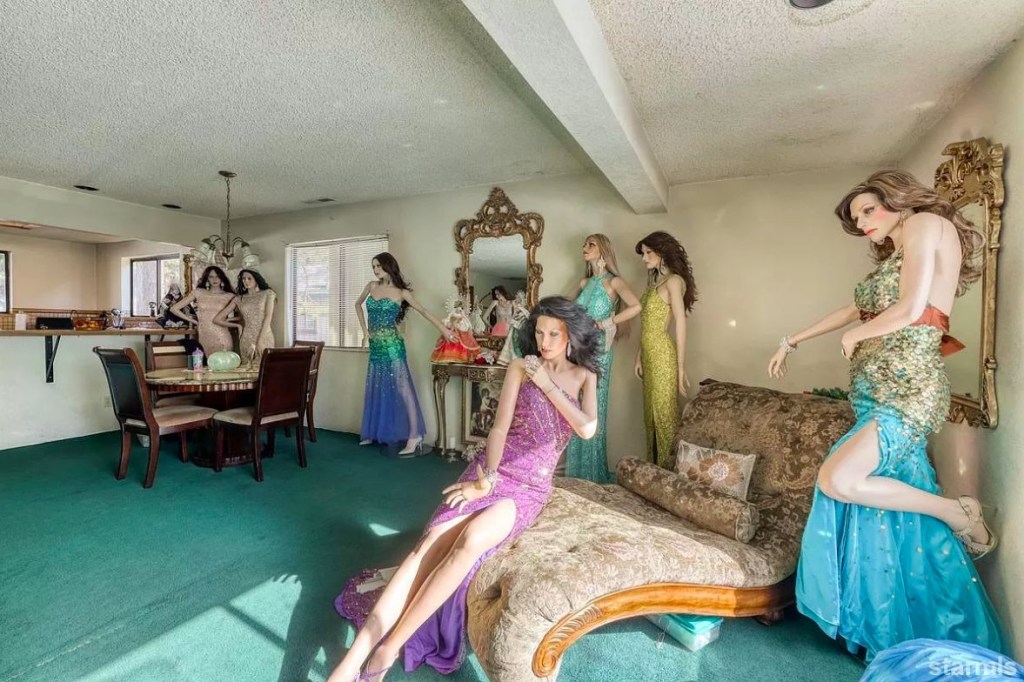 The estate agents give no explanation for the mannequins in the property description (Picture: Zillow)

A listing for a property in California has freaked people out because of the unexplained presence of more than a dozen glamorously-dressed mannequins.

The home in South Lake Tahoe, which costs $650,000 for 2,116 sq. ft. has been split into an upstairs and downstairs apartment. From the outside, the property looks completely normal, but what’s inside has left people with a lot of questions.

The downstairs apartment is a complete mess, but the contents of the upstairs rooms is, frankly, unsettling.

Photos taken by the estate agents at Deb Howard & Company reveal loads of mannequins in glitzy evening gowns, positioned into model-worthy poses across the kitchen, living room, and bedrooms.

And they are all dressed up to the nines. One wears a sparkly purple dress and matching heels, while one in a blue and gold dress is propped up near by, with the leg bent and foot resting on the wall behind her.

Two mannequins in glitzy beige gowns stand near the dining room table, while a mannequin in a blue dress with a matching scarf has been placed in a chair at the edge of the kitchen.

And there all several more mannequins dotted around, all styled with heavy party make-up and big hairstyles. One mannequin that appears to be half naked and holding a sexy pose on the floor. It is quite the scene.

As well as the inexplicable mannequins, the apartment also features quite a bit of religious artwork, too. There are a couple of angel sculptures and a large Virgin Mary statue on one side of the room. There’s also a small statue of a chicken.

Thankfully, their are no mannequins in the bathroom – but the bedrooms are a different story.

One bedroom is home to just one mannequin wearing a red dress, while another bedroom is full of mannequins, though not all of them are in their party gear like the ones in the living room. Perhaps they’re still getting ready.

One isn’t wearing much at all and is posed in a suggestive position on the floor, while the only male mannequin suit stands above her wearing a suit. Yeah, that’s creepy.

That room also has two child mannequins, a baby mannequin, a dog sculpture, and a kneeling Virgin Mary. Eclectic.

Even more concerning, the Zillow listing gives no explanation about the mannequins, but does hint that any prospective buyer will have some fixing up to do.

‘With a little love, this duplex has great income property potential,’ reads the listing.

How many Mars landings have there been and why do missions fail?