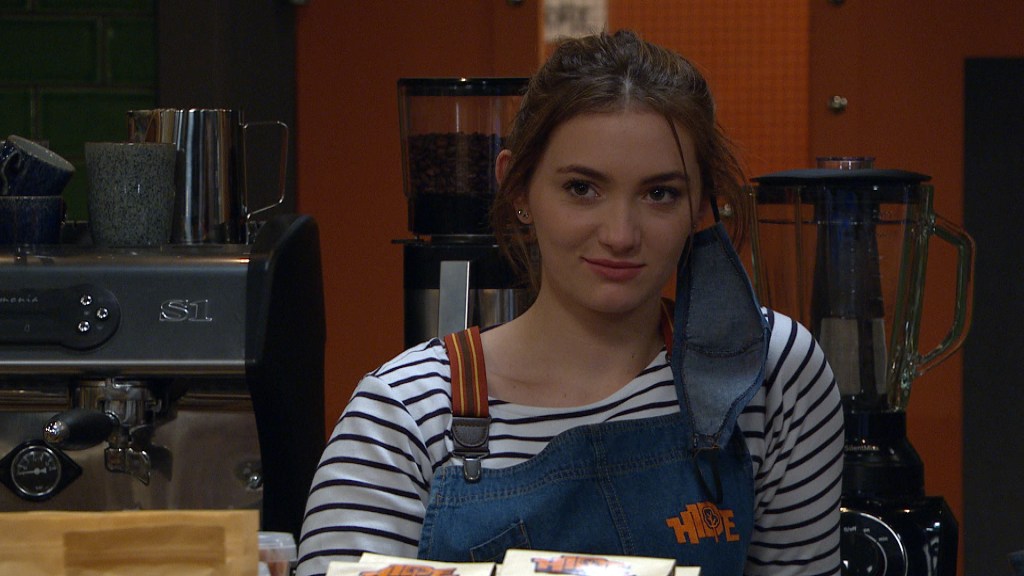 Is Gabby’s pregnancy all part of a master plan? (Picture: ITV)

Gabby Thomas (Rosie Bentham) in Emmerdale was stunned when she discovered she was pregnant with Jamie Tate’s (Alexander Lincoln) baby…but is it true?

Viewers have watched Gabby scheme recently that led to Dawn (Olivia Bromley) losing her job, and now viewers have began speculating on whether Gabby is even telling the truth about her pregnancy.

Gabby was bragging to Kim (Claire King) about her plans to win Jamie over, and fans spotted a clue that suggests the pregnancy could be fake.

Kim asked if Jamie and Gabby were getting along when she saw them in a room together without having any arguments.

Gabby said yes, but reminded Kim they were just friends, leaving her disappointed.

Kim then said to Gabby that she had got her hopes up, wanting Jamie and Gabby to be in a relationship and raise their baby together.

Gabby responded, telling Kim how a ‘family usually includes a child and we’re a few months off that yet’, and the two of them smiled at each other, leaving viewers convinced the pregnancy is all part of Kim and Gabby’s master plan.

One wrote: ‘What did Gabby mean by the last thing she said? Kinda sounded like she might not be pregnant #Emmerdale’ and another said: ‘Is Gabby up to her scheming ways again, is she actually pregnant or not? Guessing we’ll soon find out either way!’

Could Gabby be lying?

Will this all be part of Kim and Gabby’s plot to destroy Jamie?

Rylan Clark-Neal rants about influencers ‘lording it up’ in Dubai: ‘The things I work on are worthy of doing’