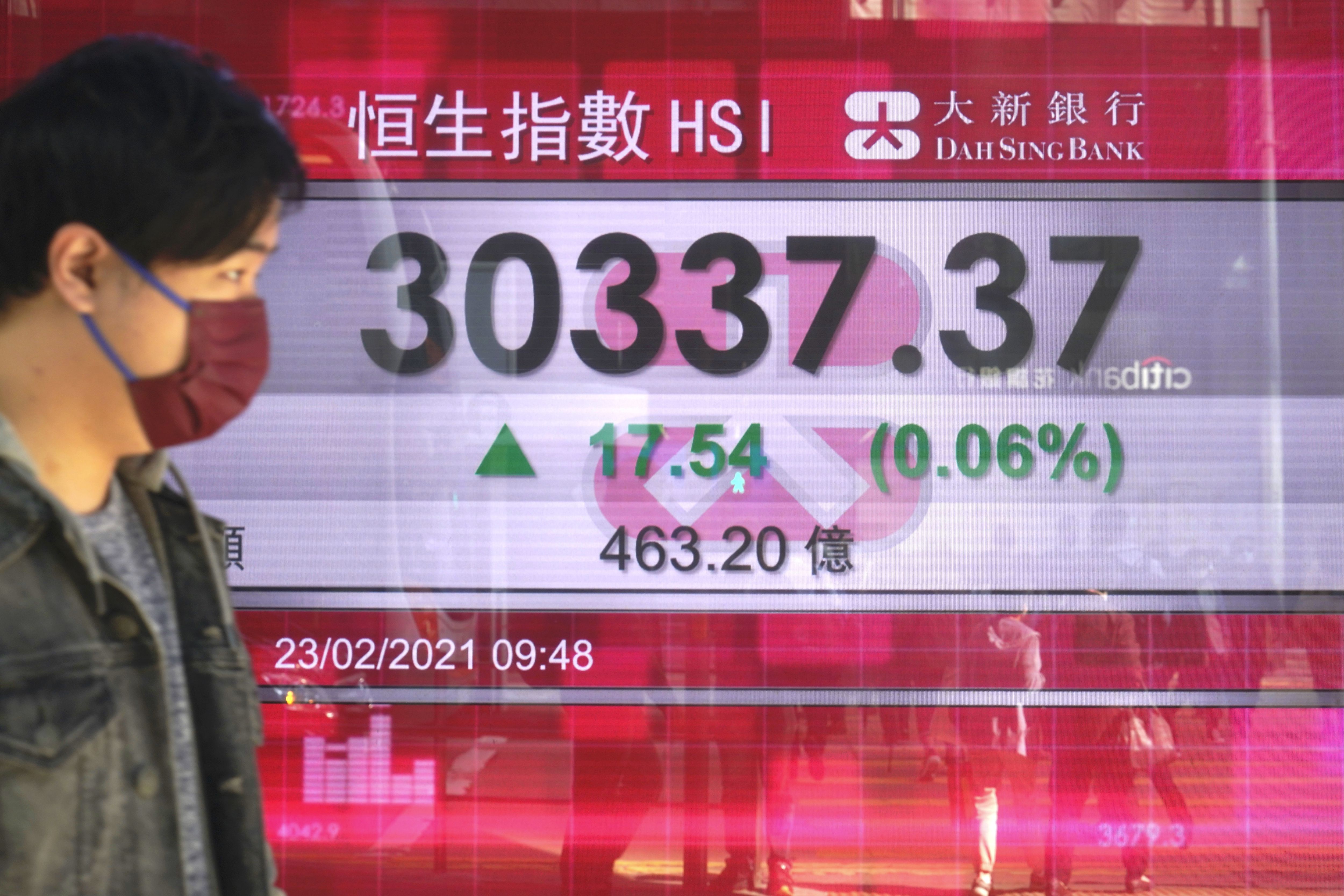 Asian markets were mixed Tuesday after a sell-off of shares in technology companies on Wall Street.

“Thankfully, for society at large, there is more optimism than fear today, with vaccines showing scientific results on the ground that validate efficacy and effectiveness over transmission, leading the world back to normality starting soon,” said Stephen Innes, chief global markets strategist at Axi.

Although the world’s economies have been battered by the coronavirus pandemic, the deployment of COVID-19 vaccines is raising hopes for a recovery.

On Wall Street, the S&P; 500 fell 0.8% to 3,876.50, extending its losses to a fifth straight day. The benchmark index was just about evenly split between winners and losers, but technology stocks and companies that rely on consumer spending bore the brunt of the selling. Apple fell 3%, Microsoft dropped 2.7%, Tesla slumped 8.5% and Amazon lost 2.1%.

Stocks began shedding some of their gains last week after a strong start to February as rising interest rates and the potential for inflation down the road dampened some of Wall Street’s enthusiasm, though the major stock indexes remain near their all-time highs.

“Equity investors are finally paying attention to the bond market,” said Mike Zigmont, director of trading and research at Harvest Volatility Management. “With yields climbing, there are a lot of jitters in the equity space.”

Investors remain focused on the future of global economies badly hit by COVID-19 and the potential for more stimulus to fix them. The U.S. House of Representatives is likely to vote on President Joe Biden’s proposed stimulus package by the end of the week. It would include $1,400 checks to most Americans, additional payments for children, and billions of dollars in aid to state and local governments as well as additional aid to businesses impacted by the pandemic.

But the large amount of stimulus being pumped into the economy has given some investors pause, reviving worries about inflation that have been nearly nonexistent for more than a decade. Yields on U.S. Treasury bonds and notes have risen in the last several weeks as investors bet the recovery will bring more inflation.

“There are some risks out there,” said Gary Schlossberg, global strategist at Wells Fargo Investment Institute. “The issue is are we just normalizing back to where we were before the pandemic or are we talking about a sea change.”

Tech stocks have enjoyed big gains throughout the pandemic, as investors bet that consumers spending more time at home would increasingly rely on mobile devices, PCs, video streaming and other technology products and services.

Alaska woman using outhouse attacked by bear, from below