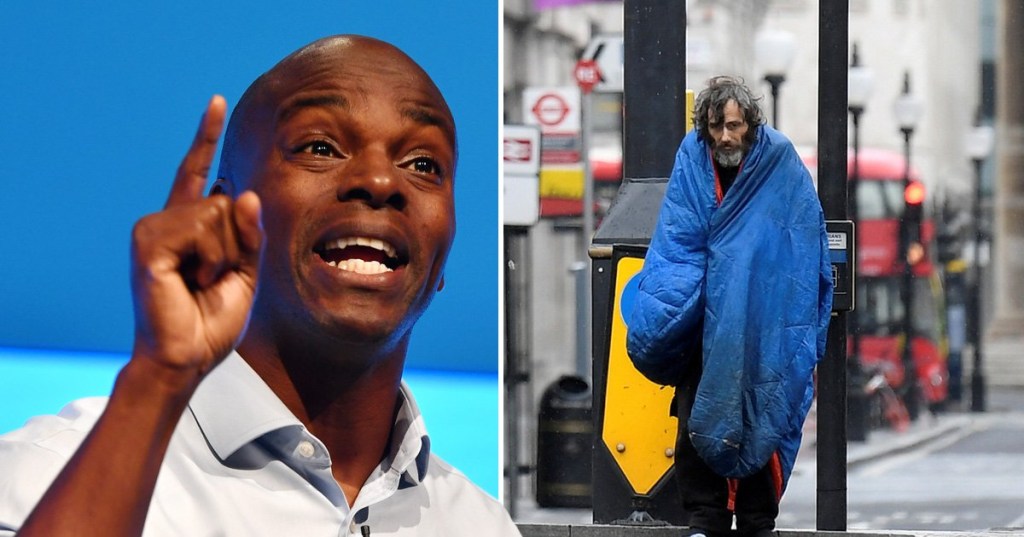 The Tories’ candidate for London mayor has said that homeless families could ‘save up’ for a £5,000 deposit.

Shaun Bailey plans to use more of the affordable housing budget to build more shared-ownership homes than Sadiq Khan, who spent more on social housing. A shared-ownership house is when residents own part of the home and rent the rest as a way to get a foot onto the property ladder.

He told Inside Housing that he wants families to be able to buy shares for £100,000 which would require a £5,000 deposit.

When asked whether he thought London’s 62,670 households currently living in temporary accommodation could afford a £5,000 deposit and secure a mortgage he said: ‘I don’t think the £5,000 will [be a problem]. The mortgage application thing might be a bit tougher … they could save for it, yeah.’

When pressed about whether homeless families could afford to save that much he said: ‘Not all of them, but some people could. A full proportion of people could.’

Social media users have blasted Mr Bailey as ‘out of touch’ with Labour MP for Tottenham, David Lammy, calling the idea ‘completely bonkers’.

Mr Bailey was asked to confirm three times that he thought people staying in bed and breakfasts could save £5,000 despite his own admission that he would never have been able to do so when he was sofa-surfing.

There are currently 62,670 households living in temporary accomosation (Picture: REUTERS)
Shaun Bailey has been branded ‘out of touch’ (Picture: EMPICS Entertainment)

The 49-year-old was homeless from the age of 21 to 27, relying on friends and his aunt for a sofa to sleep on.

He said he was ‘not expecting’ people in that situation to come up with a £5,000 deposit but believed a ‘full proportion’ of people in temporary accommodation could manage it.

He thinks his plan to build 100,000 affordable houses in the city would  accommodate the group of homeless people who cannot get the deposit together.

Londoners who could buy part of a shared-ownership house would get a ‘stake’ in the city, Mr Bailey said.

‘I spent my entire existence just trawling across London trying to find the cheapest rent, so I’m trying to get people away from rogue landlords and into much more secure situations,’ he said.

Famously people living in poverty usually have at least Â£5,000 lying around – it’s amazing that it hasn’t occurred to them to simply buy a London property, which are well known for being really cheap. Thank God senior Tories are here to give out this good advice https://t.co/tELBpZ7gbA

The Liberal Democrat candidate for London mayor, Luisa Porritt said: ‘Oh dear, the Tory candidate is at it again.

‘This time he’s suggesting homeless families ‘save up’ for a deposit. Just how out of touch can he get?’

Is the Dermalogica Neck Fit Contour Serum worth the faff?

Mesut Ozil and Arsenal reach agreement to terminate his contract