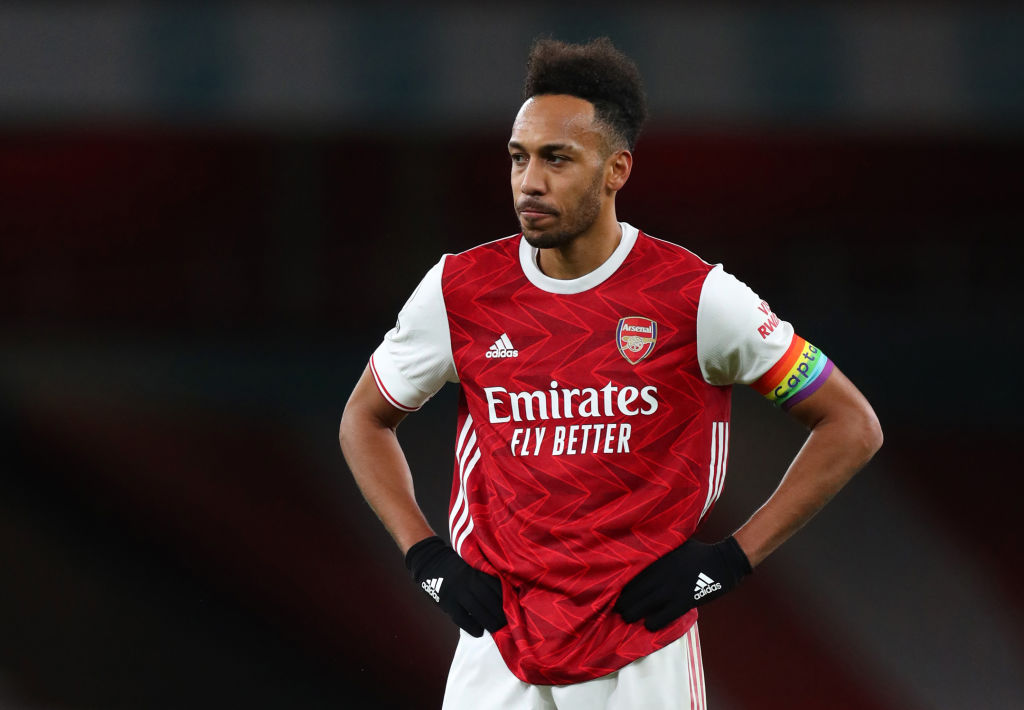 The Arsenal captaincy has been a poisoned chalice of late, with Pierre-Emerick Aubameyang its latest victim.

With just three Premier League goals to his name this season, Aubameyang is severely struggling for form and confidence, which by his own admission is making it all the more difficult for him to rouse his team-mates.

‘It’s really hard to manage both [individually and as captain] but you have to be as positive as you can because the team needs you,’ the 31-year-old told Sky Sports on Wednesday.

‘I always try to give my best, not only on the pitch but also in the dressing room for the guys. Sometimes it’s hard and maybe you are not in the right mood but you have to find a way to change it and give positive vibes for the guys.’

Those ‘positive vibes’ he speaks of have been scarce at the north London club this season, with their tally of 14 points after 14 games representing their worst return in the top-flight since the 1974/75 campaign.

Though Mikel Arteta’s side have been resurgent in recent weeks, winning four games in a row across all competitions, Aubameyang has not followed suit.

Emery put the captaincy down to a player vote (Picture: Getty Images)

How the Gabon international came to inherit the captaincy in November 2019 is a hugely contentious subject in itself. Former captain Granit Xhaka was stripped of the armband by ex-Gunners boss Unai Emery after the midfielder was involved in a spat with his own fans.

Xhaka was booed off the pitch by supporters when substituted in a game against Crystal Palace and told fans – in rather colourful terms – exactly how he felt about it.

The Swiss international was subsequently dropped while the captaincy went, almost by default, to the club’s star player Aubameyang .

When Mikel Arteta was appointed following Emery’s departure barely a month after the Xhaka incident, the new boss may have felt obliged to continue with Aubameyang in an attempt to harmonise the dressing room.

But in light of the Arsenal captain’s worrying comments about the burden of his responsibility, there are three genuine candidates in the squad who could step up to the plate.

Tierney is thriving in his second season at the Emirates (Picture: Getty Images)

Though the start of Kieran Tierney’s Arsenal career was hampered by injuries, he showed plenty of promising signs in his first season at the Emirates following his £25million move from Celtic in the summer of 2019.

The 23-year-old has built on that promise this term and established himself as a key member of Arteta’s side.

Despite Arsenal’s torrid run earlier in the campaign, Tierney was one of the few players who could honestly say they left everything on the pitch.

Committed, energetic, forward-thinking and industrious, the Scotland international embodies the hardworking spirit that has been missing from recent Gunners teams.