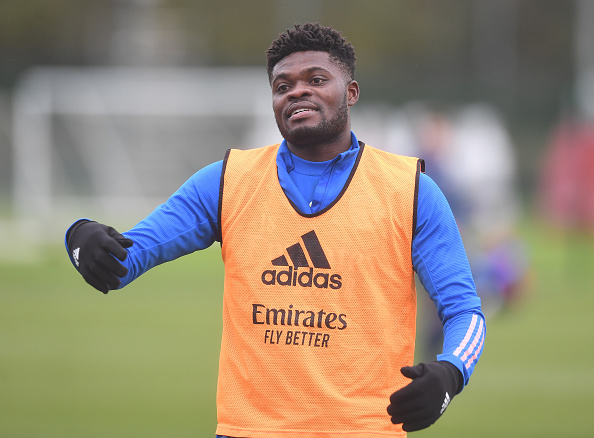 Thomas Partey is primed to make his Arsenal return from injury (Picture: Getty)

Mikel Arteta believes the returning Thomas Partey can have a transformative effect on Arsenal’s season as the club’s headline summer signing prepares to make his eagerly anticipated return.

The Ghana international joined the Gunners on the final day of the summer transfer window but has been restricted to just a handful of appearances after suffering two separate thigh injuries.

Partey’s most recent comeback, against Tottenham on December 6, last just 45 minutes and the 27-year-old has missed the last nine matches in all competitions.

Arsenal initially struggled without the former Atletico Madrid star but the return of Gabriel Martinelli and the promotion of Emile Smith Rowe has helped inspire a run of four successive wins which has helped lift the gloom.

Partey is in contention to feature against Crystal Palace this evening and the 27-year-old’s return is only likely to increase the feel-good factor, according to Arteta.

Thomas Partey lasted just 45 minutes on his most recent comeback against Tottenham in December (Picture: Getty)

Asked if Partey was capable of changing Arsenal’s dynamic, Arteta said: ‘Absolutely and because obviously we are able to watch him in training.

‘And who he is as well. I think he’s got a different presence. I think he brings something different to the team.

‘It’s not just about his talent it’s not, about his physicality, it’s who he is as a person. He makes players better around him and that’s a big quality.

‘It’s incredible that we are in January, we signed him in the summer and we only played him twice. So, we haven’t really seen the impact that we believe he could have on the team.

‘Obviously, we have missed him. On the other hand we’ve seen players stepping in as well. When that happens they give us some really positive news as well. But I think it’s going to be a big bonus if we can keep him fit.’

MORE : Arsenal in talks with Valencia over Lucas Torreira loan

Liv Tyler reveals she had Covid: ‘Being isolated in a room alone for 10 days is trippy to say the least’

The Great Pottery Throw Down: Who is Rose Schmits, the show’s new technician?