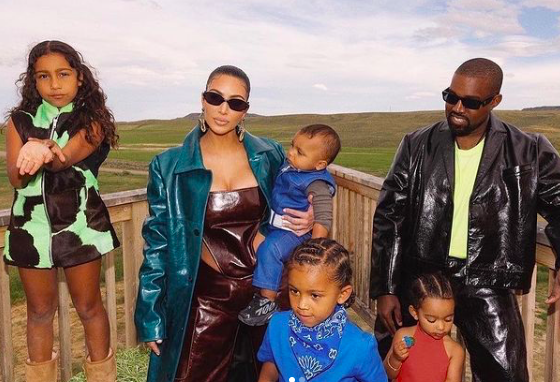 Kim is reportedly worried about her kids amid her alleged split from Kanye (Picture: Instagram)

Kim Kardashian is reportedly concerned about the effect a split from husband Kanye West will have on their children.

The 40-year-old has reportedly split from her husband of six years, and has hired top divorce lawyer Laura Wasser to handle settlement talks.

The couple share four children together, and Kim is allegedly worried about their wellbeing during what will be an extremely high-profile break-up.

A source told People: ‘The children are very important to Kim. She is worried about what a permanent split will be like for all of them concerning their well being.

‘She is asking others for advice on how to do this. But for the past few months and even longer, trying to be a normal family has been challenging and frustrating. She wants to move on.’

Kim and Kanye, 43, got married in 2014, and are parents to four children – North, seven, Saint, five, Chicago, who turns three on Friday, and one-year-old Psalm.

Chicago and Psalm were welcomed via surrogate, after Kim was advised against becoming pregnant again after being struck with placenta accreta during her pregnancy with Saint, where the placenta becomes attached to the uterine wall and can cause severe blood loss.

While Kanye is believed to have spent Christmas with Kim and the kids, the rapper has been spending most of the past few months at his ranch in Wyoming, while his family remained in California.

Kanye organised his unsuccessful run for the presidency from the ranch, as well as working on new music and fashion lines there.

While Kim has yet to comment on the rumoured split, she appeared to be wearing her wedding ring in one of her recent Instagram posts, after previously ditching the band in photos.

‘Meanwhile, Kanye is talking about running for president and saying other crazy s**t, and she’s just had enough of it.’

It’s said that Kim is hoping to keep the family’s Calabasas home, although this could be a sticking point, as although Kim owns the land and surrounding property, Kanye owns the house itself and was credited with its design.

It looks like the drama will not play out on Keeping Up With The Kardashians, as the family has already filmed their final episode.

If you didn’t watch the deliciously dark Back To Life the first time around, it’s time to jump on the bandwagon