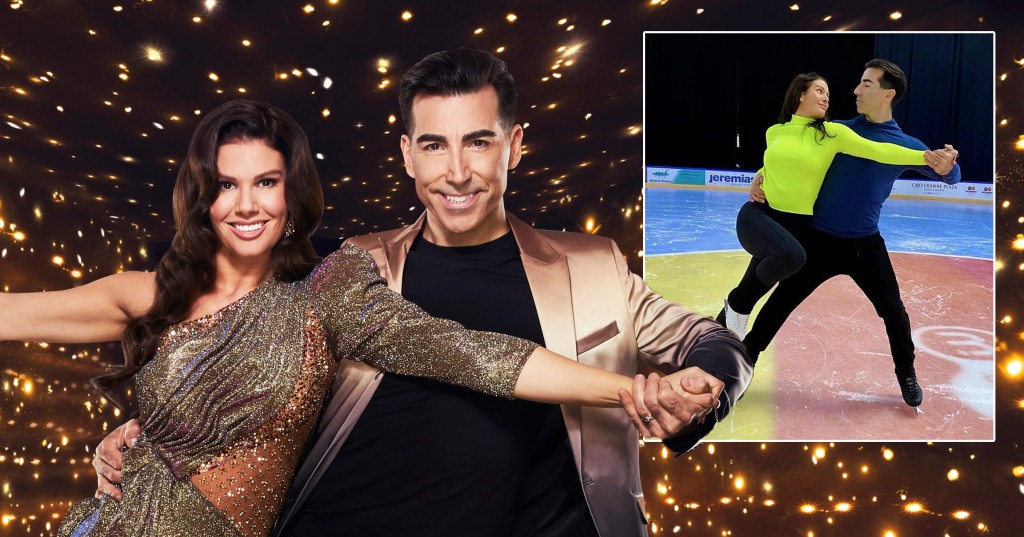 Rebekah Vardy ‘laughed’ when she injured her dance partner on Dancing on Ice (Picture: ITV)

Dancing on Ice contestant Rebekah Vardy revealed that she ‘laughed’ when her dance partner sliced his face opened during rehearsals.

The WAG and TV personality is set to take to the ice rink with Andy Buchanan this weekend as this year’s line-up performs for the first time.

Despite getting on like a house on fire, wearing fancy dress to work to keep up spirits, things haven’t been all plain-sailing for the duo.

Earlier this week, the mum-of-five and the dancing pro were practising a trick when she sliced his face open with the blade of her ice skate.

Rebekah Vardy and Andy Buchanan will skate for the first time this weekend (Picture: ITV)

Speaking to Metro.co.uk and other press about the incident, Rebekah, who is married to footballer Jamie Vardy, said that she initially laughed about the mishap because she thought ‘he was joking’.

‘I actually thought he was messing around, to begin with, because he does like a bit of a joke,’ Rebekah began.

‘The last thing he said to me was, “Don’t kick me in the face” and I was like “Why would you say that? Why have you just said that you just gonna Jinx us?”

‘So we did what we were doing, and he nearly dropped me and I was like oh s**t what was going on? And I looked at him and he was holding his face and I said stop messing about and I laughed.’

‘He removed his hand from his face and there was blood everywhere,’ she continued.

‘I hate the sight of blood. Five kids and I can’t deal with blood, I nearly passed out.’

Rebekah went on to explain that the incident did affect her confidence afterwards as she admitted to being ‘petrified’ of getting back on the ice.

Joe Scheidler, founder of the Pro-Life Action League, dies at 93

‘The very next day after I injured him, we had our show and tell in front of all the coaches and that was the first time we ran our routine in front of people,’ she continued.

‘I felt so sick, I didn’t even think I’d be able to do it. But with that, you just have to get straight back out there and straight back on it because if you don’t fear will just overcome everything that you’ve achieved so far.’