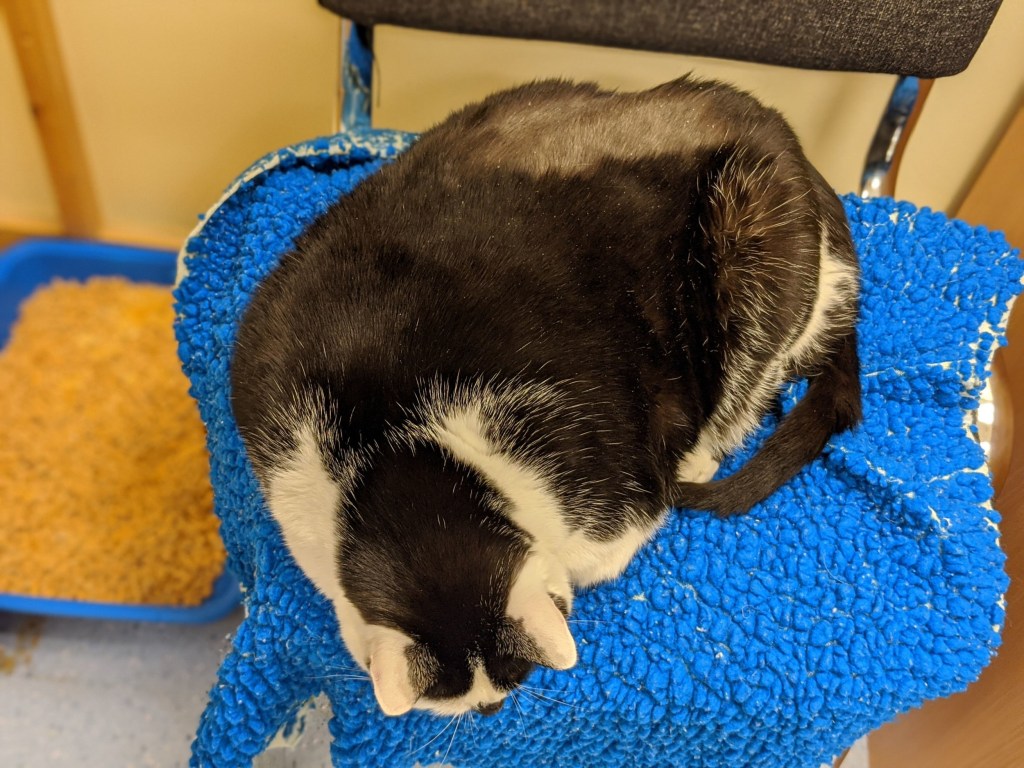 If you were thinking of giving up your healthy eating resolutions and hitting the crisps and cakes, perhaps take a little inspiration from these cats.

They were all put on diet plans by Cats Protection due to their heavier size, and each managed to lose large amounts of weight.

Paisley weighed 10.75kg when she was brought to Cats Protection last year. After being put on the specially prescribed diet, she was adopted by James Frankland, 52, and is now less than 2kg away from her ideal weight.

Cats should ideally weigh around four or five kilos, although some breeds such as Maine Coon will have a higher average weight.

While we love a chonky pet, cats and dogs with obesity can have a shorter lifespan, and experience health problems like cancer, diabetes mellitus, heart disease, and hypertension. That’s why it’s important to keep an eye on their diet.

More than three million pet cats are now overweight, with the problem becoming worse during the pandemic, the charity said.

In a survey of more than 2,000 cat owners, more than a quarter (28%) said they had overfed their pet since the start of the first lockdown in March. More than a third (36%) also said their cats had visited neighbours for a bonus feed and one in five (20%) had gained between one and 2.25kg in weight.

‘I felt so sorry for Paisley when I first met her,’ Paisley’s new owner James said.

‘She was so large she couldn’t move properly or reach around to groom herself. I have a deep love of cats and was determined to help her reach a healthy weight.

Dixie, who lost 2.5kg in weight thanks to a specialist diet plan from the charity (Picture: Cats Protection)

‘Initially she was following a vet-prescribed diet and I later moved her to normal cat food while sticking to responsible portion sizes. Paisley begged for food most days so I usually bought her off with a catnip toy or a bit more play to help her get more exercise.’

They came into the charity’s care weighing 11kg and 7kg respectively. Both cats were placed on a prescribed diet, and Dixie has lost 2.5kg in weight.

Jinky may be 14, but he’s now smaller than he’s been in a while (Picture: Cats Protection/PA)

Jinky, 14, was brought into the Glasgow Adoption Centre last February after his previous owner passed away. He had largely been fed human food and weighed 11kg.

He was given specialist obesity food and a once-a-week treat of chicken, before being adopted in June.

Maggie Roberts, director of veterinary services for Cats Protection, said: ‘This survey suggests the extra time we’ve spent indoors with our cats has led to us over-indulging them, which owners did out of love or to make their feline feel like …read more

Javon Wims’ dropped touchdown vs. Saints among many laments for Bears

Janet Street-Porter slams The Pembrokeshire Murders: ‘Luke Evans has the charisma of an ironing board’

Anna Friel ‘threw up’ after filming ’emotional’ scene in Marcella: ‘Sometimes I get myself into such a state’