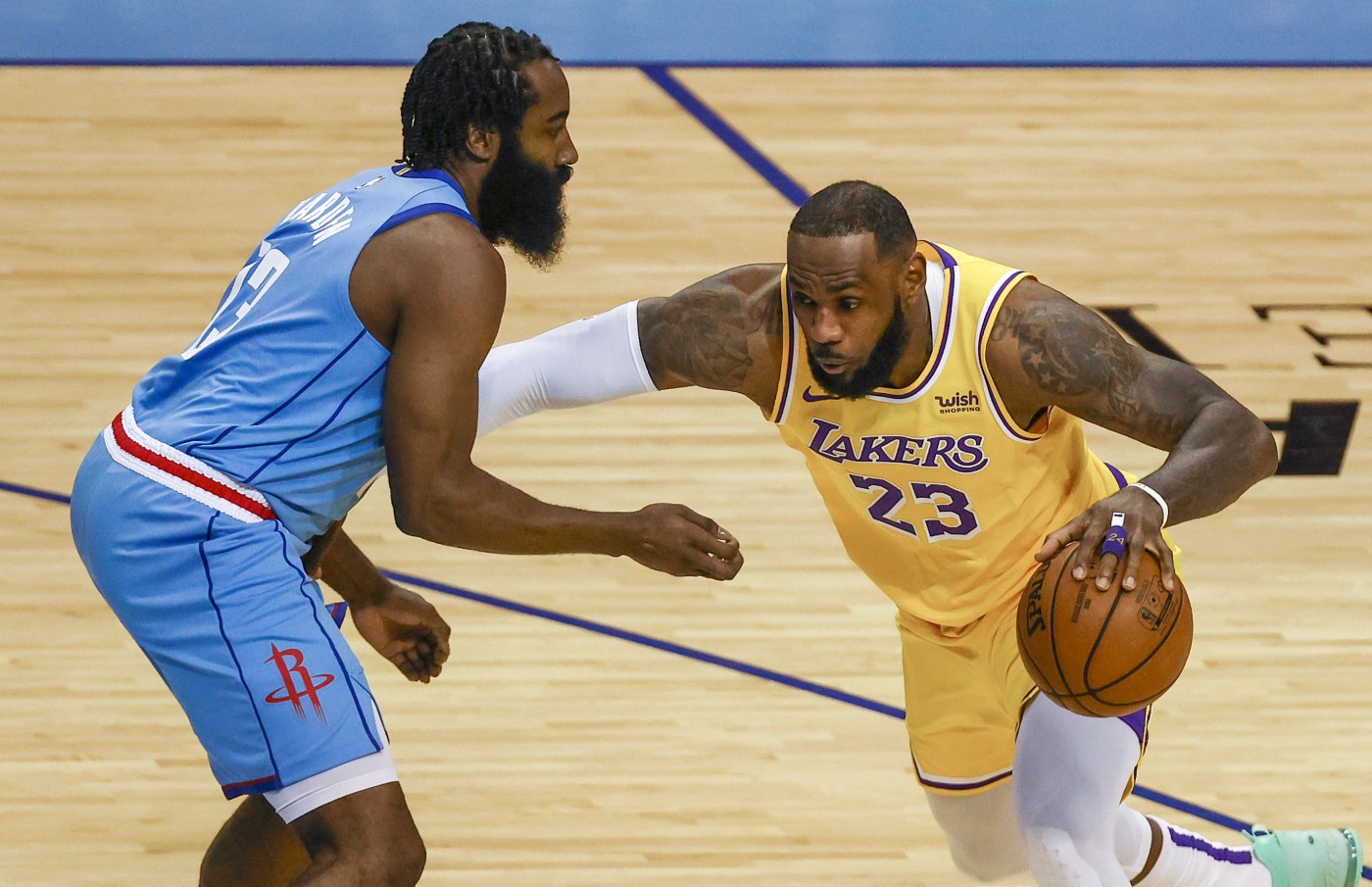 Editor’s note: This is the Wednesday, Jan. 13 edition of the Purple & Bold Lakers newsletter from reporter Kyle Goon. To receive the newsletter in your inbox, sign up here.

A 117-100 drubbing by the Lakers was the final straw in a frayed relationship for Houston and James Harden, who said Tuesday night, “I don’t think it can be fixed.” So the Rockets finally made the blockbuster trade that Harden was reportedly asking for, sending him to Brooklyn for  a package that includes a ton of draft capital and Victor Oladipo as the central star back in return.

The part that Lakers fans need to know: The Nets now have Kevin Durant, Kyrie Irving and James Harden. And the question on everyone’s mind: Is that good enough?

The Lakers (9-3 as of this writing) seem to be lapping the field so far. They’re undefeated on the road as of Wednesday morning, and the urgency they’ve played with can be best characterized as “half-speed.” LeBron James was probably being kind to himself when, after 10 games, he said the Lakers had been playing “B, B-plus basketball.”

And yet they’re still dominating: They’re tied for first in defensive rating (104.7 points per 100 possessions), sixth in offensive rating (113.5) and second in net rating (plus-8.8) only to the Milwaukee Bucks. Several of their weaknesses last year are now strengths: They’re shooting 38.6 percent from 3-point range, and they have the sixth-highest scoring bench (40.1 ppg). They have the best record in the NBA, and it’s happening with James playing a career-low in minutes and Anthony Davis missing two of those wins.

So what exactly stirs the drink in the NBA when the Lakers are this dominant?

The Bucks have to prove they can win their own conference. Ditto for the 76ers, whose shooting woes still exist even as Joel Embiid has played well to start the season. The Clippers may have gained ground after an epic collapse last postseason, but they’ll have to wait until the playoffs roll around to prove it — and their makeover hasn’t been quite as dramatic as the Lakers’.

REI's January clearance sale can save you up to 50% on Patagonia, Columbia, REI Co-op, and more

Sitting at 6-6 with Irving not sure to return any time soon, the Nets seemed to sense an urgency to shake things up, and bit into the biggest opportunity available: trading for Harden, who is still an elite scorer, who gets to play with former teammate Durant and former coach Mike D’Antoni and could conceivably vault Brooklyn into top East contender status.

How does it work? Finding enough ball time for three players whose usage was all over 28 percent in the last season they were all healthy. That assumes that Irving, the mercurial point guard who has missed every game since last Wednesday, comes back to the court and is invested — which might be a big assumption. But for a hypothetical sake, let’s …read more