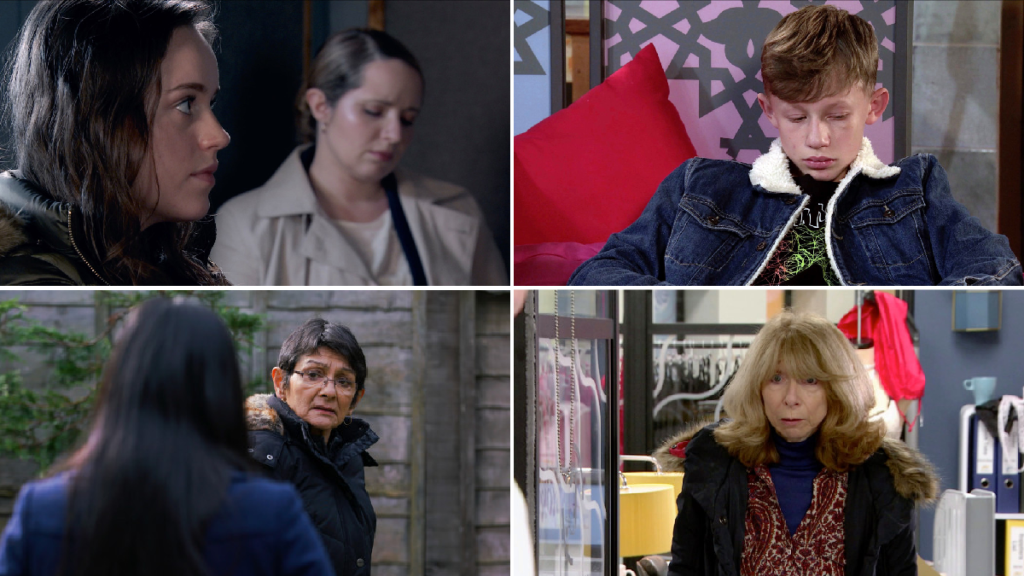 Ray Crosby (Mark Frost) is a desperate man as he clings on to his plan to demolish Coronation Street but as evidence is discovered against him and Faye Windass (Ellie Leach) and Abi Franklin (Sally Carman) expose him, he is forced to take desperate and killer action. But will Debbie Webster (Sue Devaney) stand by and help him?

Elsewhere, Yasmeen Nazir (Shelley King) struggles with her return to Speed Daal but a supportive Elaine (Paula Wilcox) is on hand to help.

As Sally and Tim bicker over moving away, Faye hurries out and she confesses to Craig that Ray tried to rape her. Craig reels as Faye opens up to him about everything and with his support, she hands herself in to the police.

Mick warns Ray he has 24 hours to find the money while Debbie reminds him that they need the money to sort numbers 4 and 6 today. Susan blackmails Ray for money over the bribe. When Ray reveals to Debbie what has happened, she is full of rage.

David, Shona and Gail pack up the house and Gail confides in Nick that she is too old to be slumming it. She is hinting for him to invite her to move in but will he bite?

Sean reveals that Dylan has been suspended from school. When he arrives, he refuses to discuss it.

A terrified Faye confesses to attacking Adam while Tim has a go at Craig for forcing her hand. Faye tells the police that Ray tried to rape her.

Debbie is stunned as Ray is arrested on suspicion of attempted rape. In a bid to stop the house sales falling through, Ray makes a desperate call.

Alya helps Yasmeen with her things but a call from the solicitor reveals Ray’s money hasn’t cleared. Yasmeen makes it clear to Ray she won’t go anywhere until she has her money – she won’t be bullied.

Alya fills David in and he confronts Ray and Debbie. David threatens to stay put but Ray issues a threat.

Dylan opens up to Sean that he has been bullied because his dad is gay.

Abi, Alya and Faye clock Ray leaving the bistro. Alya reports Ray to the police for luring her into a hotel room. Abi hides as Ray and Susan discuss their crimes, Abi records it on her phone.

Sean suggests to Dylan they get a flat together. Sean reminds Chesney that Gemma still owes him commission. Chesney is starting to feel the strain.

DS Willis questions Adam again about the attack. Adam and Sarah are stunned when Faye tells the truth.

Yasmeen returns to work at Speed Daal but she struggles. Gail persuades Nick to give her a cleaning job.

Abi confides in Faye that she has proof against Ray. Debbie suggest to Ray that he signs over everything to her as he is a liability but he claims everything is in hand. Abi …read more

What was that? More confusion, contradiction from Bears in keeping Ryan Pace, Matt Nagy